Although Sable Mountain Lodge is situated in a magnificent location, it is located just outside the Park. Thus you don’t get the excitement of being surrounded by the very wildlife that you’ve come to see, and also you have a journey to make to get to and from the game viewing areas.

Accordingly the following day we decided to take advantage of the full day trip into the Selous Reserve that is offered here. On the way down the vegetation varied widely, from dense woodland through open woodland and then heath land.

The principal objective of the trip was to undertake a new type of experience, namely a boat trip on Lake Tagilala. After reaching the edge of the lake, but before meeting up with our boat (

) and a juvenile black-winged stilt (

) (we had to ask!), bizarrely photographed in a sitting, or ‘reverse-kneeling’, position. To these we should also add the rare sighting of a monitor lizard ( 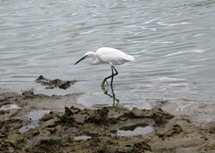 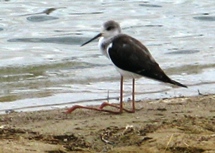 After getting into the boat, and then moving out into the lake, we ate our packed lunch, to the accompaniment of small tiger fish leaping into the boat to join us. These tiger fish were only a few inches in length - not at all resembling those that we fought tooth and nail to land on the Lower Zambezi, in Zambia Diary (2). We also saw a stately fish eagle (

). Then, during our subsequent boat ride we saw numerous crocodile (

), racing to get into the water, once they spotted us (

Being lakeside based, doesn't mean that the normal game doesn't visit here, and we saw the usual elephant (

), together with bushbuck, waterbuck, and, unsurprisingly, a hippo (

), and the colourful saddle-billed stork (

) (together with a sacred ibis to its right).

After an excellent day out we returned to camp, up its winding rocky paths (

), to have a swim and then dinner. 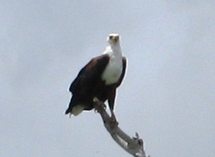