Zambia (2): Day One : London to The Lower Zambezi

On arriving in Lusaka from London Heathrow quite early in the morning (and after witnessing a most dramatic sunrise from our deliberately chosen left hand window seats, about half an hour prior to landing), we departed for the Lower Zambezi by road. Usually one flies everywhere within Zambia, partly because readily driveable roads are few and far between. But the road from Lusaka down to the west of the Lower Zambezi National Park is in excellent condition, and offers magnificent views of the Zambian countryside, as you descend from the escarpment to the level of the river. More than that, you are driving through the true rural Zambia – nothing to do with safari parks or tourist camps – which is an authentic experience that most safari-goers totally miss.

The trip takes about the same time as would a flight, allowing for transfer times etc, and is also much cheaper. We always recommend this route to our guests, especially because it allows you to ‘hit the ground running’, setting off only minutes after passing through immigration, rather than sitting around for hours waiting for a flight to another safari destination. Interestingly, just before reaching the junction with the river the route passes through Chirundu, which is a major staging point on the main commercial highway between Zambia and Zimbabwe, and the accompanying photograph demonstrates the sheer density of truck travel in this area (

A few miles further on the river is reached, and about a ten minute journey by boat (

) takes you down to Kanyemba Lodge itself (

). This has always been one of my very favourite lodges in the whole of Zambia, in addition to being one of the cheapest. It is actually situated quite a distance upstream from the Park itself (although a 3 night stay here entitles you to a boat trip down into the Park, followed by day-long game viewing here).

However Kanyemba’s real attraction (apart from the splendid Italian coffee provided by its Zambian-born Italian owner, Riccardo) is the opportunity to focus on all the river-based attractions, in addition to spending time in its very special bush camp, situated on an island in the middle of the river.

On this occasion we were being joined by my US cousin, the late Jack Gartside, a very widely known fly fisherman. Jack was very much a character, and the accompanying photograph (

) shows him fishing in Boston Harbour, many years before the idea of visiting Africa even arose.

After lunch we naturally headed out onto the river to begin our fishing. The principal catch here is the fearsome Tiger Fish (

), a relative of the South American piranha. Its teeth are coated with a coagulant, so that if you have the misfortune to even graze yourself on one of them – never mind being bitten – then you will bleed for hours.

Jack had spent some time before he came deciding upon what type of fly would serve him best (he always tied –and indeed commercially sold on – his own flies), and was raring to go. I had never fished in my life prior to coming here, and wasn’t going to attempt actual fly fishing, relying instead on the more basic bait-based ‘spinning’ technique. However I soon mastered the art of casting the bait, to Jack’s considerable approval, and we both succeeded in catching several fish (

On our return, we enjoyed a welcome dip in the camp’s delightful swimming pool, situated right on the bank of the river, before taking an evening boat cruise. A river boat cruise is delightful in its own right, but to pass numbers of buffalo, elephant (

), waterbuck and so on lining the banks of the river, in addition to numerous hippo sharing the river with us, was an extraordinary bonus. 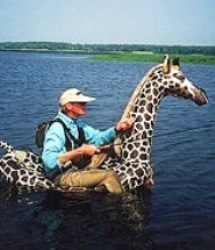