After a fairly late breakfast we went on a further game drive in Mikumi. This actually provided our best game viewing yet. As well as the usual buffalo, zebra, giraffe and elephant (

) we also saw lots of impala and baboons (

) – the greater the angle that their tail makes, the higher up the pecking order they are. We also got quite a close-up view of a crocodile (

But it was the bird sightings that really excelled. In addition to a lilac-breasted roller (

), below (its name means hammer-head, for obvious reasons).

). Plus one bird whose name we were told, but then immediately forgot, but which was too striking not to include here (

After lunch we were taken to the airstrip, and reunited with Soqui who then took us on the twenty minute flight down into the neighbouring Selous Reserve (named after Sir Frederick Selous, a famous big game hunter and early conservationist, who died in Tanzania in 1917 while fighting against the Germans during World War I), to then be driven up to Sable Mountain Lodge.

This is an unusual lodge set in a wooded hillside location just outside the Selous Game Reserve. It includes 4 tented bandas set on raised wooden platforms in a secluded part of the camp and overlooking a beautiful wooded gorge.

Then there are a further 9 stone bandas (

), scattered over the hillside and offering wonderful views. All tented and stone bandas have en-suite facilities and private verandas and are very elegantly furnished (

As at Tent With A View I got assigned the honeymoon suite again, situated in one of the tented bandas (

), below with its ‘shower with a view’, not for the faint-hearted, being quite open to the surrounding countryside, and with a steep drop off to one side (

I did try having a swim in the camp’s pool, but, surprisingly, the water was actually too cool, situated as it is under a gazebo, out of the direct sun ( 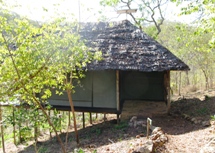 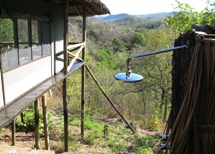 On climbing up to the bar situated at the top of the hill on which the camp is set we found that it was somewhat lacking in seating, although there was a large sofa there. However this was fully occupied by camp host, Riccardo, who showed no inclination to move, despite several of those having to stand being quite elderly.

During our later communal dinner Riccardo totally monopolised the conversation, and we realised that this wasn’t necessarily going to be the best-hosted stay that we had ever experienced (however soon after we returned to the UK we learned that a new hosting team had been appointed). 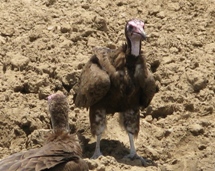