On waking up the next morning, just in time to catch a very colourful sunrise (

), we found the area outside our tent heaving (if that is the appropriate term) with large numbers of the diminutive dik-dik (

). One of our camp hosts then arrived (

) to take us to our vehicle, for transfer to Samburu airstrip (

). From there we flew to the area of the Maasai Mara, stopping off at at least four other airstrips along the way.

As already explained, we have no desire at all to stay within the Maasai Mara National Park itself, since, for the most, it is usually vastly overcrowded with game viewing vehicles, making their way through wildlife about as wild as that in a zoo. However, as the map below demonstrates, there is a much larger area of Maasai Community land to the north and north west of the Mara itself, certain areas of which, directly bordering onto the Mara, have been developed into Conservancies each containing only a small number of camps, game viewing being restricted to these camps' vehicles alone. 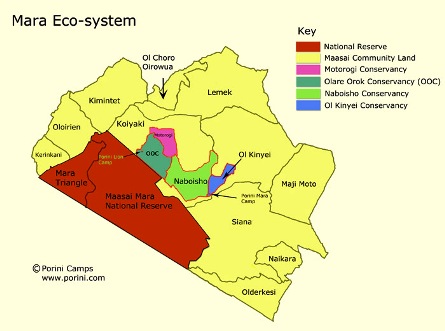 Our first three night's stay was arranged for Porini Lion Camp, in the Olare Orok Conservancy (OOC on the map above. You can see how close the camp is to the actual border of the Mara itself. Needless to say, the wildlife isn't aware of such borders).

We took a game drive on our way to the camp, the first wildlife seen being a number of buffalo, one of whom seemed rather dubious about our presence (

), followed by a Coke's Hartebeest (

), below, and, at the other end of the size spectrum, a number of banded mongoose (

), below. As we approached the camp, we could see large numbers of wildebeest on the plain down below (

), demonstrating that you don't have to be here at the time of the Migration to see wildebeest in large numbers.

Porini Lion Camp was of a similar tented variety (

), below, to most of those encountered previously, although perhaps a small step up from their Amboseli and Ol Pejeta camps in terms of comfort (

), below, with simple, but comfortable, communal facilities (

), opposite. Unlike most of the vehicles supplied in the Mara itself, their game viewing vehicles were of the ideal open-sided variety (but with the welcome addition of a sun top for shade ( 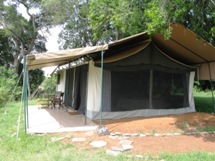 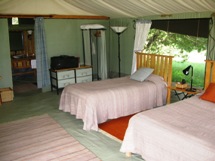 ), below, together with further wildebeest, a couple of which were embroiled in a scrap (

), below, together with a cheetah who couldn't be bothered to clamber to her feet, although keeping a close eye on us (

), opposite. Only joking - lions in repose even outdo cheetahs in terms of total oblivion to their surroundings.

Late in the afternoon we were watching a lioness with her three 5-day old cubs along a river bank, when a huge hail and thunderstorm broke: you can just about pick up the female disconsolately hunched amongst some bushes (

). We eventually took our sundowners wrapped up in ponchos, seated in our (open-sided) vehicle. 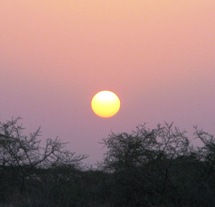 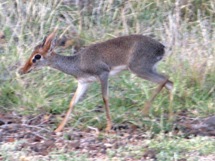 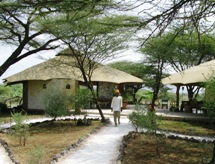 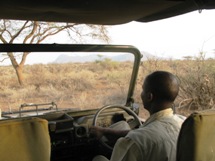 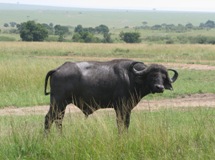 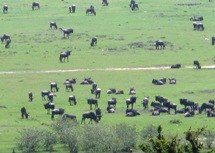 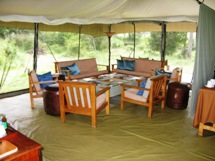 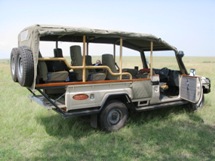 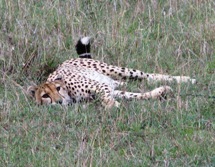 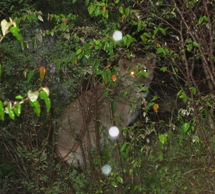