Despite its (to me) not that inspiring setting, Joy's Camp itself was well up to the extremely high standard set by its owners, Cheli & Peacock (who also own Elsa's Kopje). Set in the Shaba Reserve section of Samburu, it is the only camp to run game drives in this area, ensuring welcome exclusivity for its guests.

The camp itself is located on the site of Joy Adamson's tented home here, and it houses a small museum of Joy Adamson memorabilia (

). Further reminders of her presence, including a memorial plaque (

), are set in the grounds. The camp overlooks a large natural spring where a wide variety of game jostles for drinking rights. Lion and cheetah hunts have even been witnessed from within the camp itself.

), below, was superbly furnished (

), below, with delightful communal areas and grounds ( 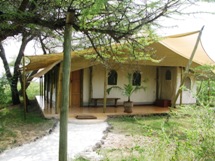 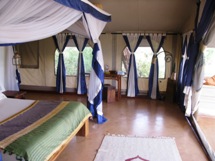 On our first game drive we saw a fine cheetah (

), together with a gaggle (?) of yellow-billed storks (

), below, and what was described to us as a Squacco Heron (a migrant species) (

From the car our guide spotted tracks that he reckoned had been made by a lion dragging a recent kill, although there was nothing actually to be seen nearby. Then amazingly (he wasn't armed), he parked the vehicle, and walked off into the bush to see if he could spot anything, leaving us on our own in the vehicle. He wasn't successful, but later in the drive, though, we did see a couple of lions after all (

The main purpose of the drive had been to take us to a point where we could undertake a guided walk. We had looked forward to this with some anticipation, but it instead turned out to be a pretty steep rock climbing expedition. Although the views from higher up looked as though they might be pretty good (

), we had to insist on calling a halt to proceedings, as it was just too tough to climb like this in the heat of the day.

We then stopped for a very welcome refreshment break, in a shady spot by the river (

), with a somewhat somnolent crocodile for company (

), below, although with no stretch of the imagination could one link it to the elephant skull that we came across close by (

), below, appeared to conclude our day, until we came across a herd of well over 200 buffalo some way in the distance (

), opposite. What better way to then end off the day (and fill up the page) than to include a further magnificent sunset ( 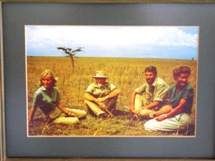 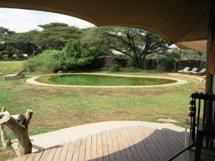 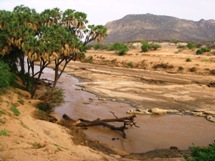 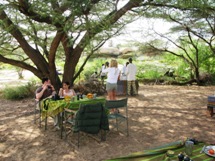 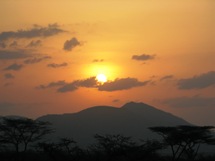