After a noisy night, with both lion and hippo wandering through the camp, we drove out a short distance until we had crossed the river, and then set out on foot, accompanied by a guide and an armed ranger (

Apart from simply experiencing the pleasure of taking to our feet again in the bush, and especially walking camp to camp, rather than just taking a local walk around camp, an objective of this excursion was to establish the possibility of our setting up serious walking safaris in Kenya. To date this hadn't been possible, since walking is not permitted in Kenya's National Parks (unlike in Zambia), but this restriction doesn't apply in the various Conservancies.

See our companion website Kenya Walking Safaris for more information about this project.

On this walk the terrain was mainly flat, with not much wildlife to see, despite this being open bush country. Perhaps the major example of such was a large herd of Maasai cattle and then, later, some sheep and goats, tended by some young children and their mothers (

). As we passed by two of these Maasai ladies (

) approached our guide and asked what on earth I was doing out walking like this. Apparently they thought that I was far too old to be exerting myself in this fashion. Thank you ladies!

Along the way we did, however, come across evidence (

) that not everything out here survived to tell the tale. However a solitary ground hornbill (

), together with a topi antelope (

) did provide us with some evidence of true wildlife.

Our final approach into camp was, unusually, across a wobbly looking bridge over a stream (

), concluding what had still been an excellent walk.

It cannot be emphasised enough that a camp-to-camp experience like this characterises the true walking safari: there is nothing to compare the feeling of satisfaction of approaching your (new) destination in this manner (having survived the multitude of dangers encountered along the way!).

Immediately on arrival we were told that a leopard had just been spotted close to camp, and so we all jumped into the camp vehicle and roared off to try to spot it. Pretty soon we saw it striding (

), with the presence of hyenas (

), below and both marabou storks and white-backed vultures (

), below, indicating that it might recently have made a kill. Following up on all this, our skillful guides eventually led us to the bloody carcass of some species of antelope (

), below, not in flight at all. Along the way we also saw a buffalo, taking a bath (

Our subsequent evening game drive had to be terminated early due to a further thunderstorm, but not before we saw a couple of lions taking it easy together ( 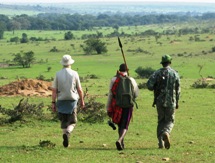