Further bush babies were heard overnight, and in fact Fumba turned out to be rife with wildlife by Zanzibarian standards. For example, we had observed two lizards mating on the deck outside our banda (

), and also spotted geckoes, red squirrel and even an elephant shrew!

We had booked a tour for this morning through the Lodge itself, to the island's capital, Stone Town, although we might have been better going via a central tour agency, since our guide was rather poor, and only capable of spouting what was obviously a pre-learned spiel as we went along, being totally stumped by any questions.

The town itself was fascinating to just stroll through, although the fact that it chose to rain heavily didn't help much. Among memorable sights were a building covered in scaffolding (made out of bamboo poles!) ( 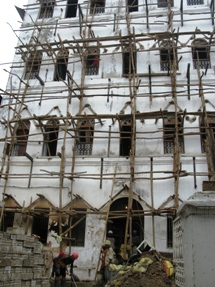 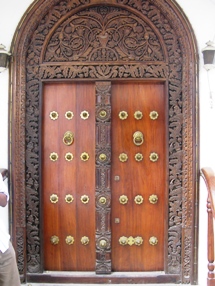 ), opposite led us to places such as the fruit and vegetable market, and the nearby (very smelly) meat and fish market (

), below. Waiting outside was the Stone Town equivalent of a taxi (

There was so much more to see in Stone Town that it was a shame that the persistent rain - and sheer fatigue, built up over a tough three week trip - meant that we had to cut our visit short. But we'll certainly be back! If only to discover the history behind the final photograph that we were able to take (

Our afternoon was then spent exploring the Lodge further, resting on the beach, taking a swim, and finally ending up with a great 4-course dinner. 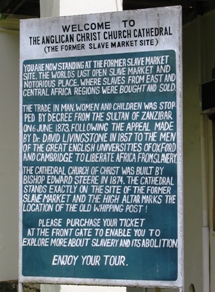 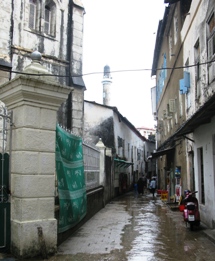