Tanzania & Zanzibar: Day One : London to Dar and Saadani

Although we were intending to finish off our stay on the Tanzanian mainland with a few days on the nearby island of Zanzibar, with its fabulous beaches, we had also decided to start off with some beach relaxation by visiting the Saadani National Park, located on the coast several hours' drive north of Dar.

Saadani's unique attraction, however, is that it contains a copious supply of wildlife, so that it is the only National Park where you can go on a game drive to see the wildlife in the morning and then spend the afternoon lounging on the beach (

) with the gently lapping Indian Ocean at your feet, watching the Swahili fishermen and the billowing sails of the traditional dhows sailing past. And if you're lucky you might even see elephants frolicking in the shallow waters.

Both game drives and walks are conducted here, to view a vast array of antelope including greater kudu, eland and sable antelope, as well as zebra, buffalo, giraffe and wildebeest, together with secretary birds and grey parrots. There are also large herds of elephant and several lion prides as well as leopard, hyena and black-backed jackal.

Maybe its most mind-blowing aspect, though, is the possibility of actually coming across lion tracks whilst relaxing on a beach (

) (although hopefully not the actual lion that made them).

), the subsequent green landscape then giving way to dry tundra.

In Saadani we were booked into the Tent With A View lodge. On arrival, after driving through a corner of the Saadani Park, where we saw baboons, wildebeest and giraffe, we were warmly greeted by the lodge's resident staff, and presented with a freshly gathered coconut by way of a drink..

I was then escorted to my personal tent (we were the only people in camp that night), which turned out to be their honeymoon suite (

), which fronted right on to the beach (

) – but (appropriately perhaps, under the circumstances) was only supplied with a cold shower.

Wherever possible local materials had been used in the camp’s construction, and this was particularly reflected in the spacious lounge/bar/restaurant on a raised wooden platform (

), below (seen here at night), which overlooked the Indian Ocean and included a ‘star gazing’ deck (

), below, which at night was equipped with huge floor cushions and stools – a great place to end a perfect, if rather extended, day. 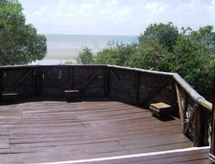 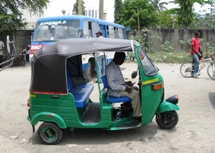