The following morning we took a short walk with one of the camp staff, Stafford, to his local village, which was situated just beyond a huge banana plantation, where they grew and then packaged bananas for distribution all over Africa.

The village was considerably spread out, with approximately 100 homes, housing up to about 10 people in each family. Various produce was available for purchase in the village (

), and we could see how they had to get their water from a single pump (

We always encourage guests to make a visit like this if they can. The world of the safari park and safari lodge is actually so artificial, and it seems a shame to come all this way and not actually get to see the ‘real’ Africa, i.e. its people and their homes.

Later in the morning it was of course time to go fishing once more. Although Jack had brought all his own gear, the camps always have fishing gear to lend to guests (although not always fly fishing equipment), and the boat guide will do everything for you, bar the actual catching of the fish (and even that, if you can't manage it yourself). Thus he will bait your hook, land the fish once brought up to the boat, safely present it to you so that you can proudly get your photograph taken (

), and then release it back into the river.

As I say, I had never fished in my life before, but I soon mastered the art of striking hard once the fish took the bait, followed by the sheer excitement, and considerable physical effort, of reeling it in, seeing it fight every inch of the way. I don’t think I would want to do it, though, if it wasn’t on a catch-and-replace basis.

On this particular occasion we were accompanied by another (lady) tour operator, who also had never fished previously, but who managed to catch a total of six Tiger Fish (

), compared to the total of four that Jack and I managed to catch between us – to (especially) Jack’s, considerable embarrassment. He'd even tried fishing from the river bank itself (

In the afternoon we were to go canoeing – again a brand new activity for me. This is the strength of visiting an area like this, in that, with expert help provided, you can undertake activities you would otherwise never had dreamed of doing (more later!).

Since the river is very strong running, the idea was to canoe down river for a certain distance, and then to be picked up by a boat, which would take us back, towing the canoes behind. If we’d tried to canoe back we’d still be there. Of course a complication is that the river is full of hippos (

), which need to be avoided, since they could turn you over in a flash. Swimming to the crocodile-laden river bank (

) wouldn’t then exactly add to the experience.

In the event it was a most exhilarating experience, and not at all physically demanding, with a strong current pushing you along your way (and a local Zambian guide in the back seat to provide the ‘engine’) (

). This does also remove much of the potential danger, since he's also effectively doing the steering (and knows what he's doing).

In the evening we took a further boat ride, with various bird sightings taking pride of place, including, below, grey heron (

), together with a lilac-breasted roller ( 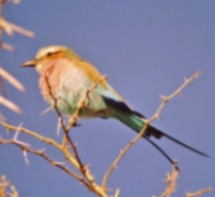