After hearing lions nearby on and off during the night, and waking to find several kudu grazing just outside our tent, we went out on a morning game drive. The one downside to Mdonya had proved to be the presence of numerous and very aggressive tsetse flies on the route into camp.

After suffering considerably from these on the previous day, I had decided to wear my waterproof plus hood, tightly buttoned up to my chin, together with a thick rug over my legs and feet. Possibly not the height of elegance (

), but it certainly kept me from being bitten!

After the inevitable, but still quite magnificent, male lion (

), we came across a herd of buffalo, drinking at a water hole (

), followed by the somewhat rarer sighting of a monitor lizard (

), below, which also decided it needed a drink (

For quite a while after this we saw very little of note, but then suddenly came across a pride of lions on a buffalo kill (

), below. In fact we soon realised that these were the young lions of the pride, the adults having fed first, and who were lying down to one side, with obviously very full stomachs (

), below. As can be seen their jaws clearly showed that they had recently been feeding (

One further photograph that we took was too sad to be shown here. Off to one side there was a female lying on the ground, which had been heavily gored, with her intestines hanging out.

Obviously the buffalo had put up quite a fight, and it was a timely reminder that matters don't always go the predator's way. We had thought that she would be dead by nightfall, but were later told that she was still alive a couple of days later, although it is difficult to see how she could have survived.

Onto a somewhat subdued lunch, at a picnic site supplied with a small shelter (

), a quite bizarre spectacle. It is all in a very slow motion, with considerable pauses in between each blow, but the latter are nevertheless delivered with great ferocity.

Basically they take it in turns to swing their bony heads into the other giraffe's soft underbelly, as can be seen here. It is for this reason that the male giraffe's horns are bald at the top (the hair having been worn away by the above antics) whereas the female's horns are still quite hairy. Further sightings included an elegant impala (

) and the comparatively rare crowned crane (

It turned out that our camp hostess, Nicola, was also heavily involved in a project to track and identify the remaining wild dogs in the nearby Selous Reserve. She was thrilled, therefore, to see the photographs that I had taken whilst at Lake Manze Camp, and to be able to transfer these to her own laptop. I then decided to try to wind up her by saying that of course I'd heavily edited these pictures, using Photoshop, in order to make them look better, but she wasn't fooled for very long. 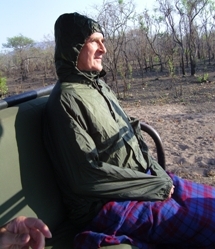 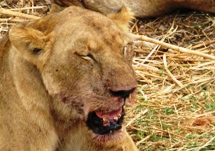