Ruaha River Lodge is quite a large camp, with 28 bandas, spread along the bank of the River Ruaha (

), and with friendly communal areas (

). Wildlife abounds here as it comes down to drink at the river, and, as we have seen, elephants are a regular feature around the camp.

Each banda has a double and single bed, and an attached well-furnished sitting area (

), below, together with spacious en-suite facilities including a walk-in shower. Each has a private veranda (

), below, overlooking the river where you can watch the many and varied animals and birds which come down to drink at the water's edge.

On this, our first full day at Ruaha River Lodge, we might be forgiven for expecting that lions would once again prove to be the main attraction. Well, lions there were, but it was elephant that were to give us one of our most amazing experiences ever in Africa.

The day began watching marabou stork plodding across in front of our hut, and then early sightings of a feisty-looking elephant (

), impala, giraffe and kudu on the subsequent game drive (luckily with a much better guide this time). 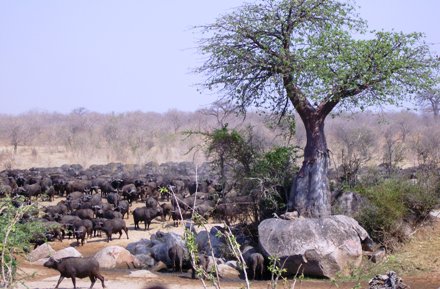 We also spotted lions close by – one male and two female and a number of young. One of the young ones raced across the dry river bed and actually took down a young buffalo calf, but the old bulls turned and started to advance on the lion and she let go and the young buffalo escaped.

), opposite, and the lions, although changing their positions all the time, couldn’t find an opening for a second attack, and eventually retreated back to safety (

).  Meanwhile the adult  male lion and the two lionesses just lay and watched from the hillside above (

This was obviously regarded as little more than a training exercise for the youngsters. The whole pride eventually settled down on the hiilside, among some rocks (

), although the cubs were still keeping a sharp eye on things (

), where we had drinks high above the ground. On the way back to camp we stopped at the dry river bed just outside camp where we saw a large herd of ellies (

We parked on the bank close by and then suddenly realised that one of the ellies had recently given birth - the guide reckoned about ten minutes previously.  The afterbirth was still lying there (

) (and can also be seen in the bottom right of the above picture) and there was blood on the mother’s leg and the baby was still trying to find its feet.

). What made it especially difficult for the baby to find its feet was the fact that the birth had taken place close to a very rocky river bed, where it was now stumbling around.

One of the young males became overexcited by all this, and tried his luck with a somewhat older female. She simply cuffed him hard around his head with her trunk, and he mooched off 'with his tail between his legs' (as it were) (

The film crew that we had seen filming the lions a few days ago were staying at the same lodge and were green with envy at missing this pretty unique event.

After lunch we went out on a further game drive in the late afternoon, returning to the river bed where we saw the lions and buffalo in the morning.  The buffalo had moved on and the lions were sleeping.

The male lion was fast asleep right next to the track (

) and we tried to make a noise on the sides of the vehicle to wake him up, but without success.  Even so, our driver wouldn’t go anywhere near him.

), but some of the slats were broken, and our guide said it was too dangerous for us to walk across. It had originally been the way across to the airstrip, but now a proper bridge had been built further along the stream which could withstand the floods.

This had been a most remarakable day, characterised not just by static game viewings, but by two unfolding stories. And it wasn't quite over yet, since we were woken at 1.00 a.m. by an elephant trying to demolish the makuti roof of our banda. It was interesting, rather than frightening, and we spent the next hour watching him through the windows as he slowly moved around the back of the banda and down the side towards the river bed. 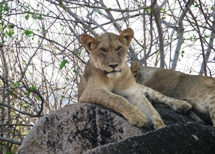 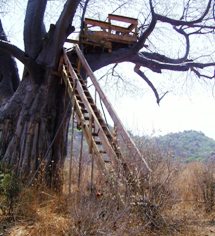 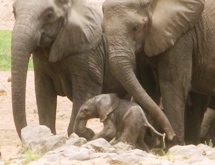