First thing in the morning, before breakfast, we set off on a game drive, spotting yet another lion (!) (

), below, together with a most elegant zebra (

), below. The countryside here was quite different to the usual flat bush, being quite hilly and rocky (

About an hour later we came across a pride of 19 lions, stretched out in a perfect narrow line along the patch of shade caused by a tall tree (

), below. It's exactly the same strategy that my cats out in Spain adopt.

Despite their initial lethargic attitude, these lions became quite alert (

), opposite, and took a considerable interest in us. Being cats, the theory is that they aren't able to hold your direct gaze for very long, but the young lady opposite (

) and I gazed deep into each other's souls for the best part of 20 minutes. This was a very special experience, but, reluctantly, we had to move on. 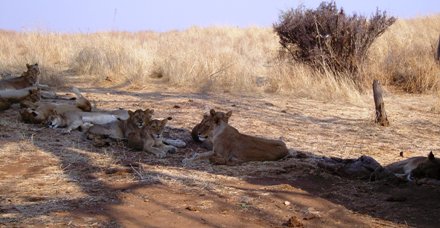 ), together with a giant kingfisher (

), and a Defassa waterbuck (

), below (the Defassa variety is characterised by a solid white rump, in contrast to the 'toilet seat' appearance of that on the common water buck).

Next our way was blocked by a large herd of buffalo (

), below, followed by yet another lion sighting, this time a big male, (

After lunch we were taken on our hour long journey to Ruaha River Lodge (this time according to plan). Once there we watched a family of banded mongoose taking a drink just in front of our hut (

Our afternoon game drive wasn't very good, principally due to the poor quality of our driver. However, relying on our own experience, we were able to spot a Marabou stork (

), giraffe, impala, jackal, hyena and a grey kestrel. Then an elephant wandering quite docilely ahead of us on the track (

), below, got quite stroppy when we tried to go past (

Just after dinner, an ellie went across the front of the restaurant and, when we went to our banda, accompanied by a Maasai guide, it was behind our banda. This was a bit worrying because it was very dark and although we could hear him we couldn’t see him unless the Maasai shone his torch on him.

Eventually the Maasai said he would go and scare him off , leaving us standing with minimal cover in the middle of nowhere! So we were left to make our way back to our banda ourselves. 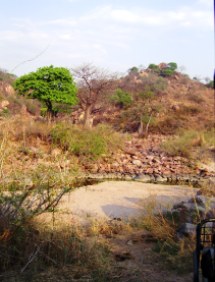 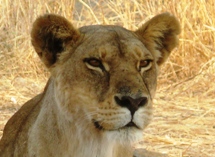 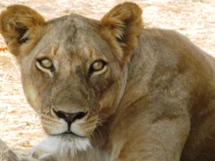 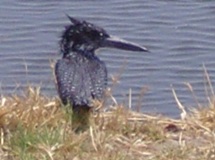