). After a quick coffee we set off on a game drive in the area around the camp. Kigelia isn't just a lavishly furnished, albeit, bush, camp, but its vehicles (

), below, are, by a long way, the most luxuriously appointed that I have ever experienced (

The game drive itself yielded a surprising number of new sightings. In addition to both greater and lesser kudu, we spotted the tiny dik-dik antelope (

) and a black-backed jackal (

), below, together with the very sparse remains of a long-dead giraffe (

In addition to a ground hornbill, we also spotted a red-billed hornbill (

), below, a francolin, a grey kestrel and a swallow-tailed bee eater (

Breakfast out in the bush, by a nearly dry river bed, was accompanied by a number of elephant, attempting to take a drink (

) opposite. Then after lunch back in camp, and on our way to Mwagusi, about a half hour drive away, we came across more lions (

). Truly, Ruaha must be considered one of the best wild-life viewing destinations in the whole of Africa!

And then, for me, Mwagusi Safari Camp, (

), below, is one of the very best safari camps in the whole of Africa.

In part this is because its owner, Chris Fox, is also its resident manager, which usually guarantees you an above average experience. This sort of arrangement is common in Zambia, but less so elsewhere.

The camp's location is ideal, on the banks of the Mwagusi River, in the heart of this spectacular Park, and its construction is perfect - tented bush camp, rather than luxury lodge, exactly fitting its environment.

) has a comfortable seating area, overlooking the river, with flushing toilet and walk-in shower (

), although evening meals are often taken party style outside under the stars (

Both game drives and walking safaris can be undertaken from here, and the guide quality, which is actually the most important factor of all, is absolutely superb.

In the afternoon we went out on a game drive, seeing elephant, giraffe. zebra, impala, a dwarf mongoose, guinea fowl - and then, just to top it all off, a large pride of lions!

) is only a very small selection of the large number of photographs that we then took. A film crew from Kenya was also present, busy getting in as many shots as they could.

On our return we enjoyed a couple of sundowners, followed by a very sophisticated dinner under the stars. 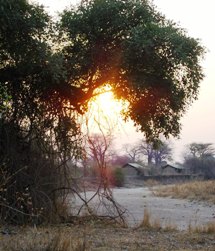 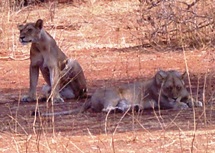 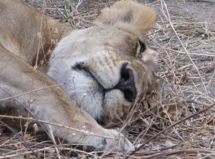 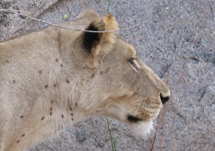