As so often, our best experience at the camp came on the morning that we left for our next destination. After being visited by another ellie, walking across in front of our tent (

), we set off on a game drive, designed to conclude at the airstrip for our flight out from Selous to the Ruaha National Park.

One objective of the excursion was to try to locate the leopard and wild dog seen by some of the guests on the previous day. We didn’t find leopard – but we did find wild dog!

They were simply sleeping underneath a tree, and hence very receptive (or totally uncaring) to having their photograph taken. I make no apology for the number of photographs reproduced here (

), below and opposite – the wild dog is so rare that many visitors to Africa fail to see them at all despite making numerous such visits.

After having breakfast by the lake we were taken to the airstrip to once again be reunited with our pilot, Soqui (

). We flew from Selous back to Mikumi, where we swapped our 12-seater Cessna for a six-seater version, and then travelled on to Siwanda airstrip in the Ruaha National Park.

This is where it all began to go wrong. We were booked into Kigelia Camp for the night, but, for some reason, our hosts for two nights later – Ruaha River Lodge – had arrived to collect us.

There is always some sort of language barrier when travelling in a foreign country, and, although I had clearly stated that we were heading for Kigelia, on being picked up (since their vehicle had the Ruaha River Lodge name on its side), they nevertheless took us in the opposite direction - to their own camp.

A mistake, rather than a kidnapping! The Kigelia people had been waiting for us at the airstrip, but in a different place.

After lunch at Ruaha River Lodge it was all sorted out, and we eventually reached Kigelia late in the afternoon, in time for a bucket shower and then an excellent dinner, followed by  a long chat around the camp fire (we were their only guests).

Kigelia had only recently been constructed, and although of traditional tented bush-type construction (

), and, like Lake Manze Camp, very much open to the bush and its inhabitants (

) it is extremely luxuriously furnished (

), with the bucket shower being an authentic touch, rather than a nuisance (for example, it has fully flushing toilets!). 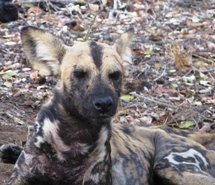 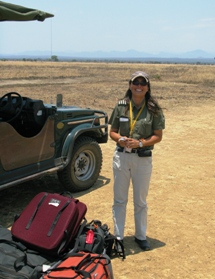