), one of which can be seen here carrying its baby clutched to its body underneath (

), below, while another joined us for breakfast (

Before departing from Rufiji River Lodge we went for a final game drive, soon coming across a young bushbuck (

), below, in contrast to the open-sided variety that most decent camps and lodges provide (

), below, and the yellow-billed stork (

It is perhaps worth pointing out to those 'twitchers' amongst you that, although we do try to include at least one photograph of all the big game seen, the number of bird sightings is far in excess of what are shown here. Partly this is because of the greater difficulty in getting good bird shots.

Sorry we can’t show you photographs of all of these!

After lunch we were driven to our next port of call - Lake Manze Tented Camp. Now this is what I call a bush camp (

)! It's right in the middle of the bush, for a start, and you definitely have to keep a look out for the likes of elephant and buffalo as you make your way to and from your hut, not to mention while in the communal areas as well (

), opposite, seeing both hippo (

Getting back at only 6.00 p.m., it was brought home to us just to what extent this was a genuine bush camp, as it had no electricity! This made it somewhat difficult to unpack and get ready for dinner, since it was virtually dark by then. We were collected from our tents (and later returned to them) by Maasai guides, reflecting the 'open to the wild' nature of the camp. 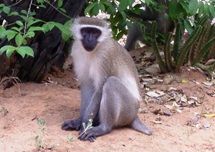 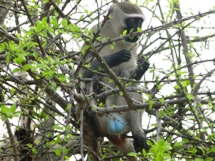 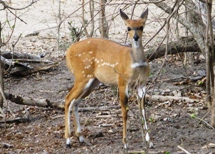