Kenya : Day One : London to Nairobi and Amboseli

Our Virgin Airways flight to Nairobi landed at just before 8.30 a.m., after giving us a marvellous view of the sunrise. A 40 minute flight then took us to a first destination, Amboseli National Park, in the south of Kenya. Rather than head straight to camp we were taken on an extended first game drive, followed by a bush lunch at the base of the well-known 'Observation Hill' landmark.

Our first game sighting was of two elegant zebra (

), followed by a number of elephant that were half-hidden in a swamp (

), below, together with their young (

On our way to lunch we saw further elephant (

), below, and several Grant's Gazelle ( 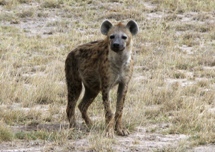 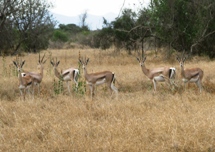 Also of interest was a pied kingfisher (

), below, and a number of weaver bird nests (

), below, where we stopped for lunch, surrounded by a whole bunch of quite tame, and very inquisitive, superb starlings (

), below. A nearby female baboon also took a considerable interest in our lunch (

), below, provided by our hosts, Game Watchers Safaris, and the far inferior closed sided type so common in Kenya and elsewhere (

After lunch we proceeded on our way to Porini Amboseli Camp, where we were to stay for our first night, and which is actually situated over an hour's drive from the National Park.

There wasn't much further game to see along the way. The camp itself was fairly basic in construction, with quite private and widely spaced tents (

), which were simply, but comfortably, furnished (

), followed by drinks around a communal camp fire, and then a welcome early night. 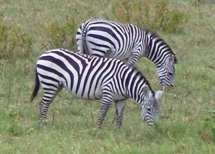 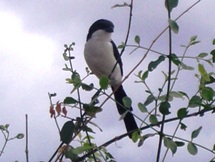 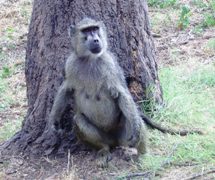